In-brief: In this, the first in a three-part series on REST API, Neeraj Khandelwal of Barracuda Networks discusses the growing importance of application program interfaces to business success, and how API insecurity poses a significant and under-appreciated risk to businesses. 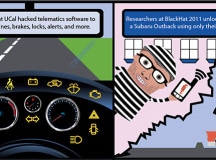 McKinsey: Consumers Want Connected Cars – And Fear Them, Too

The consulting firm McKinsey & Co. has released an interesting report on the future of connected vehicles. But it has some sobering data for car makers: concerns about privacy and the possibility that connected cars could be hacked are major concerns for consumers that could dampen enthusiasm for smart vehicles. The report, “What’s Driving the Connected Car?” finds that connectivity features will be a major driver of car sales in the coming years, with car buyers increasingly accustomed to vehicles that sport sophisticated interactive and networking features. That said: security concerns may hamper the “rapid and broad adoption” of connected vehicle technology. For its report, McKinsey interviewed 2,000 new car buyers in four countries: Brazil, China, Germany and the U.S. The survey found that a quarter of respondents considered connectivity a more important feature than engine power or even fuel efficiency. The firm estimates that connectivity features will become increasingly important selling features […]