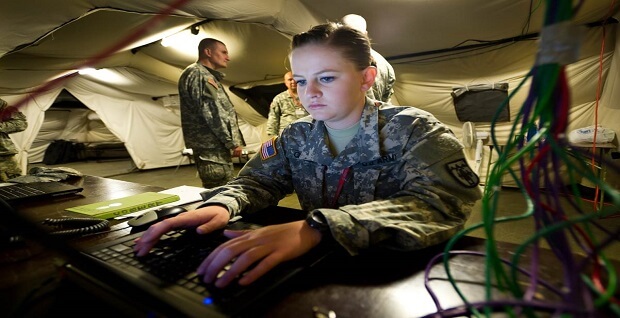 Fitness trackers leaking troop movements aren’t the only – or even the worst problem the Department of Defense (DoD) has to contend with on the Internet of Things (IoT). Behind the scenes, the military is having a hard time keeping up with private sector organizations in its use of Internet of Things technologies and may be missing out on opportunities to leverage IoT technology to improve military effectiveness, military leaders said in a published report.

A of technical expertise among DoD personnel in using IoT technology, the difficulty of finding devices rugged enough for use in combat and concerns about the security risks of connected devices are among the top reasons preventing the U.S. military from keeping pace with the commercial sector in IoT adoption, they said in an article published by National Defense.

Just as the DoD’s ARPANET laid the foundations for the Internet, the U.S. military also was an early adopter of IoT technology, a Commerce Department executive told the magazine, which is published by the National Defense Industrial Association (NDIA). The NDIA is a trade group for the U.S. government and defense industry.

“When I started my career, the cutting-edge work was all in defense,” Keith Gremban, director of the Institute for Telecommunication Sciences at the Commerce Department’s National Telecommunications and Information Administration, said in the report. Army programs such as the Nett Warrior integrated dismounted situational awareness and mission command system, and the Force XXI Battle Command Brigade and Below communication platform were IoT precursors, he said.

However, despite a head start in the IoT world, the military’s adoption of connected technologies has lagged, leading to questions and criticism. “Is DoD still a player in IoT [or] have they drifted out?” Gremban said.

One of the reasons the DoD is so interested in IoT-related technology—such as connected smartphones, tablets, wearables and other devices—is that military leaders think will be helpful to them to gather intelligence in urban warfare. This is something they expect to rise in coming years due to the rapid growth in urban populations globally.

While DoD leaders believe that IoT-enabled devices can become tools for situational awareness in these future urban wars, there are a number of worrying factors that are preventing the military from fully embracing IoT technology, they said. At the top of the list is the inherent lack of security of connected devices and the risks to so-called “operational security” (or “OPSEC”) that they pose.

The recent security breach caused by wearable fitness trackers that reported to the website Strava is a typical example. The US Military has been a strong proponent of wearable fitness trackers, even purchasing thousands of them to give to military personnel in 2013 in an effort to fight obesity. The UK military has done the same for their soldiers as recently as 2016 where obesity rates are as high as 18%.

That move proved to be short sighted when Strava—a self-proclaimed “social network for athletes” that allows its users to share their running routes–released a newly updated global “heat map” showing military workout routes last November. Eagle eyed Internet users zoomed in on the locations of known- or suspected military bases in combat zones in Afghanistan, Syria and on the African continent to find the outlines of known and secret military facilities nicely outlined on the heatmap, presumably by soldiers and intelligence officers using Fitbits and other wearable devices on their morning runs. Supply runs and other connections between bases and local population centers also turned up on the Strava heat map: a gold mine to both terrorists and enemy nations.

Security and OPSEC aside, another issue the DoD is having with adopting the IoT is lack of technical expertise among not only internal personnel but also troops on the ground to properly deploy IoT systems, one official said in the report. Data scientists in particular are lacking at the DoD from the top down, he said.

“I think that’s a gap that, broadly speaking, the DoD is trying to figure out,” Maj. Ryan Kenny, operations and executive officer for the Army’s 30th signal battalion’s network enterprise center at Wheeler Army Airfield in Hawaii, said in the report.

You might also be interested in reading: New Rapidly-Spreading Hide and Seek IoT Botnet Identified by Bitdefender

Part of the military’s lack of skilled personnel who can understand IoT technology and its benefits is a cultural problem, as there already are a lack of qualified candidates in the data science field in the U.S. job sector. The U.S. military is probably not the first place qualified people might look for a job, Kenny acknowledged.

Another cultural issue the DoD struggles with in terms of DoD implementation is the general approach the military takes to deploying technology versus the factors concerning the commercial industry, Thomas Burns, director of the strategic technology office at the Defense Advanced Research Projects Agency, said in the report.

The commercial industry is taking advantage of the IoT faster than the military because private-sector companies prioritize accessibility and cost when it comes to developing the technology. On the other hand, the military and other defense stakeholders are more concerned with survivability and security, he said.

“Our issue is hardening the packaging so [the devices] can survive in really challenging environments,” Burns said in the report.

It’s also generally more difficult to convince military leaders to spend money on the resources and personnel needed to securely and correctly implement new technologies related to the IoT within the highly regulated budget structure of the DoD, officials said. Without the mandate of a national government budget, commercial companies aren’t as hamstrung to invest quickly in new technologies and resources.